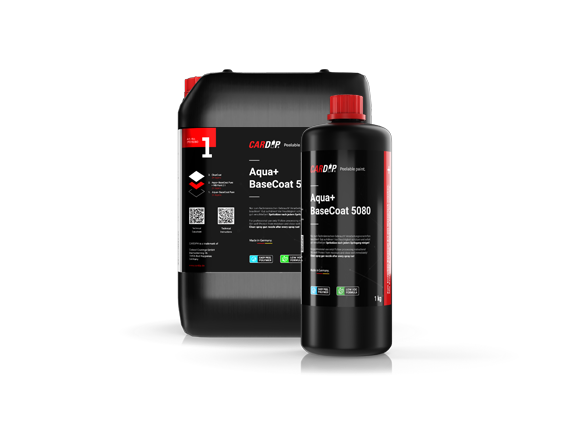 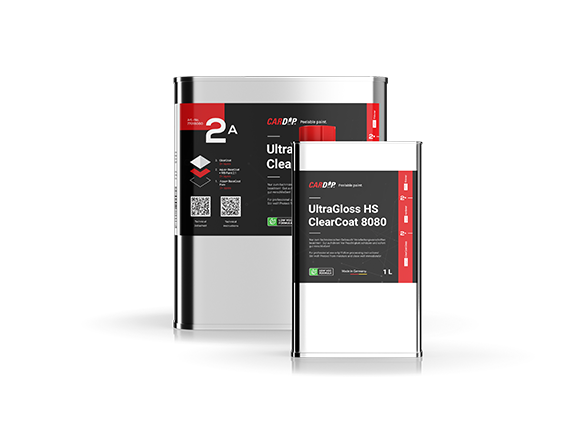 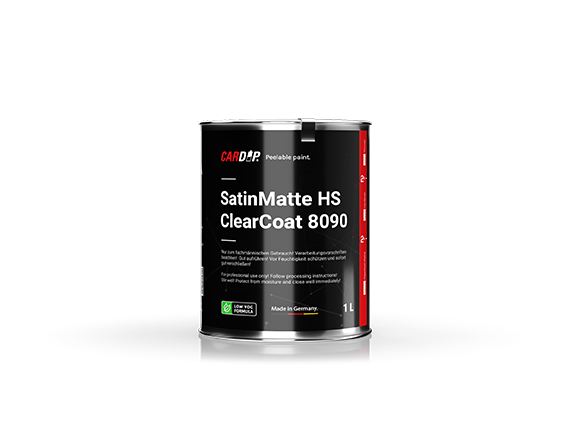 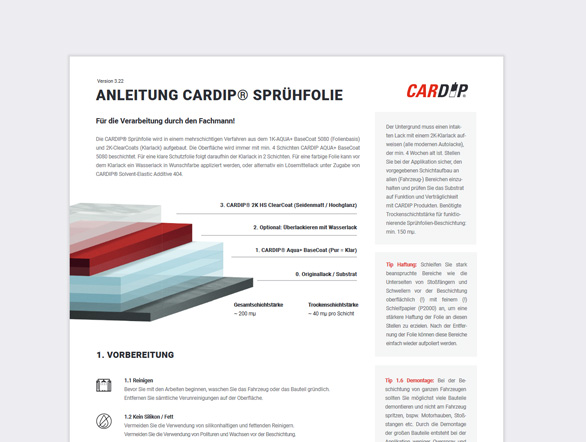 Changing the color of the car and protect the original paint from stone chips and scratches - the possibilities for coating vehicles and vehicle parts have so far been limited to a costly, permanent paint job or classic vehicle foiling (car wrapping) with limited options. The innovative technology of Peelable Paint combines the advantages of paint and film and makes it possible to seamlessly coat individual vehicle parts as well as complete vehicles.

The peelable paint optimally conforms to the body shape in the liquid state and permits seamless 'foiling' of even complex 3-dimensional shapes such as bumpers and mirrors without the use of a knife. 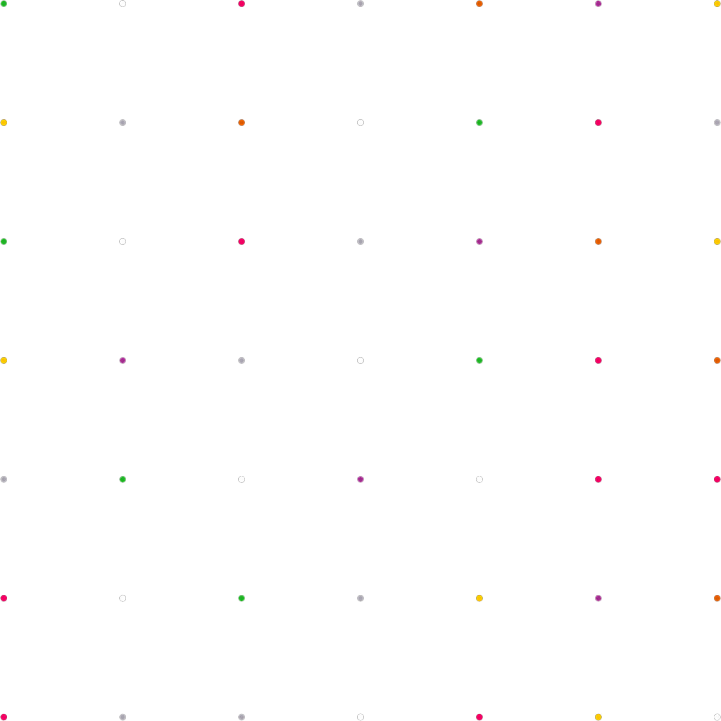 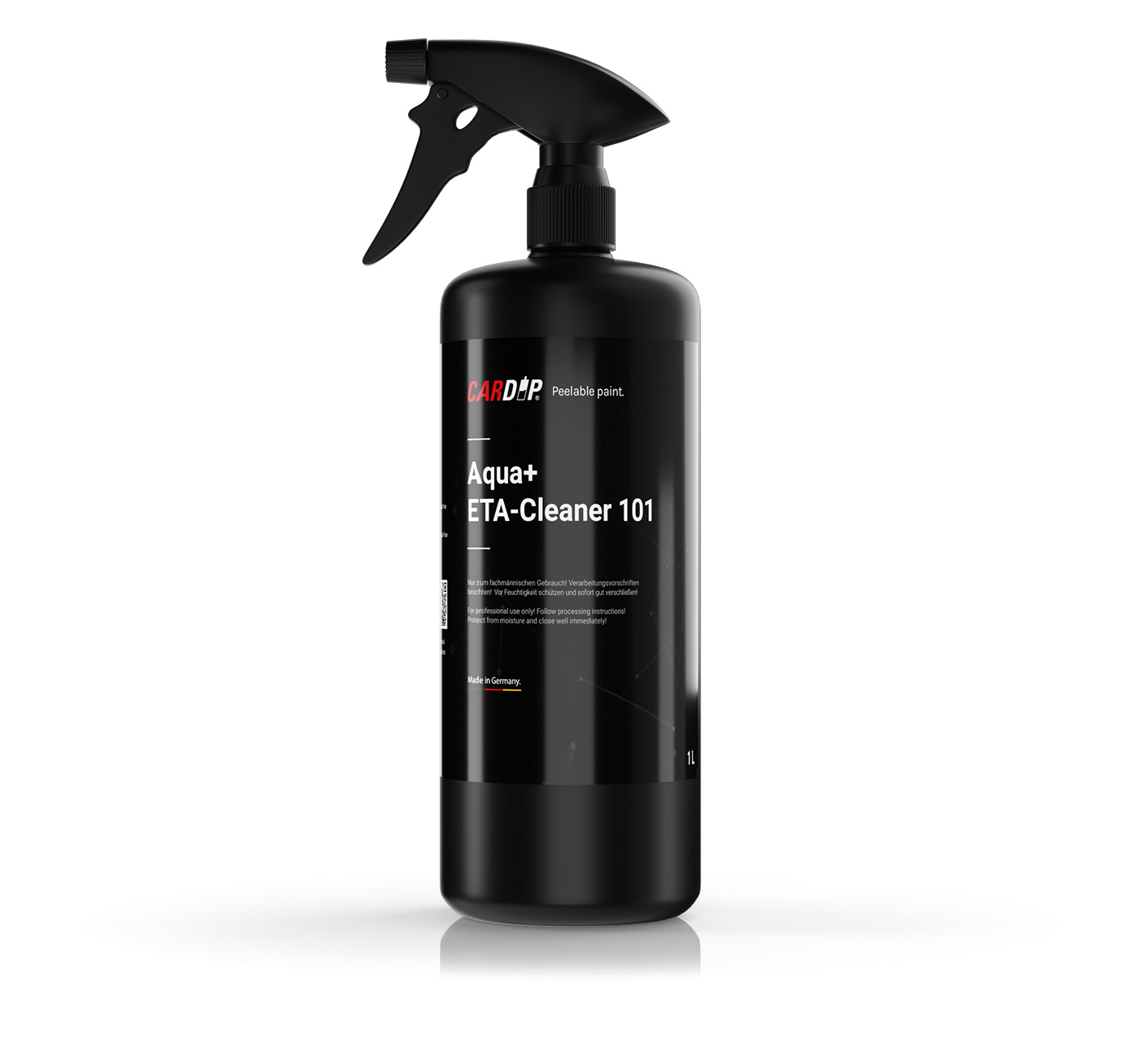 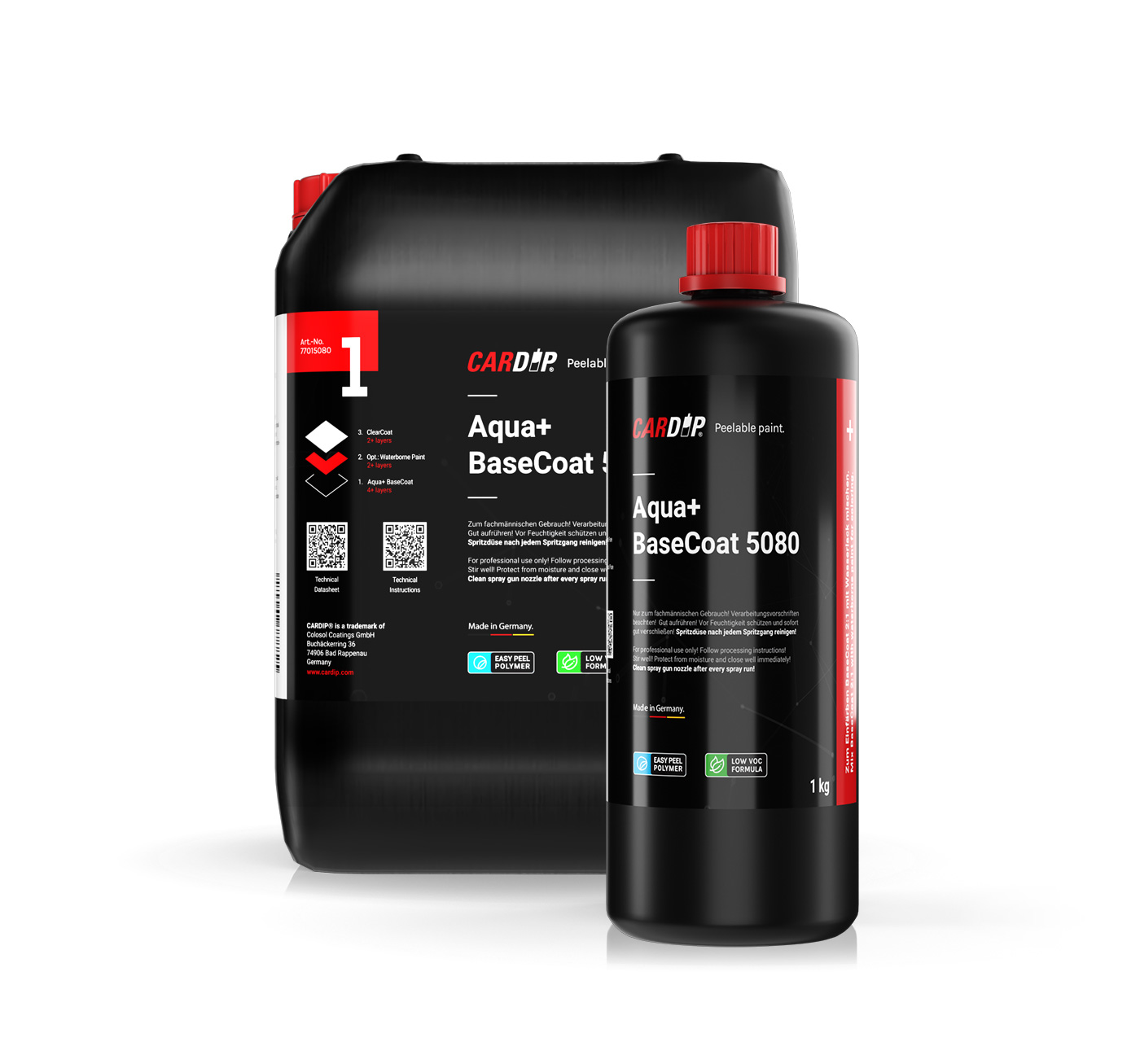 The CARDIP Aqua+ BaseCoat is the foundation of the Multi-Layer Process™ developed and patented by CARDIP for liquid automotive foiling and the core of the CARDIP Peelable Paint System. The innovative Easy-Peel-Polymer™ forms, by applying the spraying method, a colorless and permanently elastic film coating which can be easily removed without leaving any residue. The product is compatible with all common water-based automotive paints and can thus be overpainted as required in any desired color and effect. 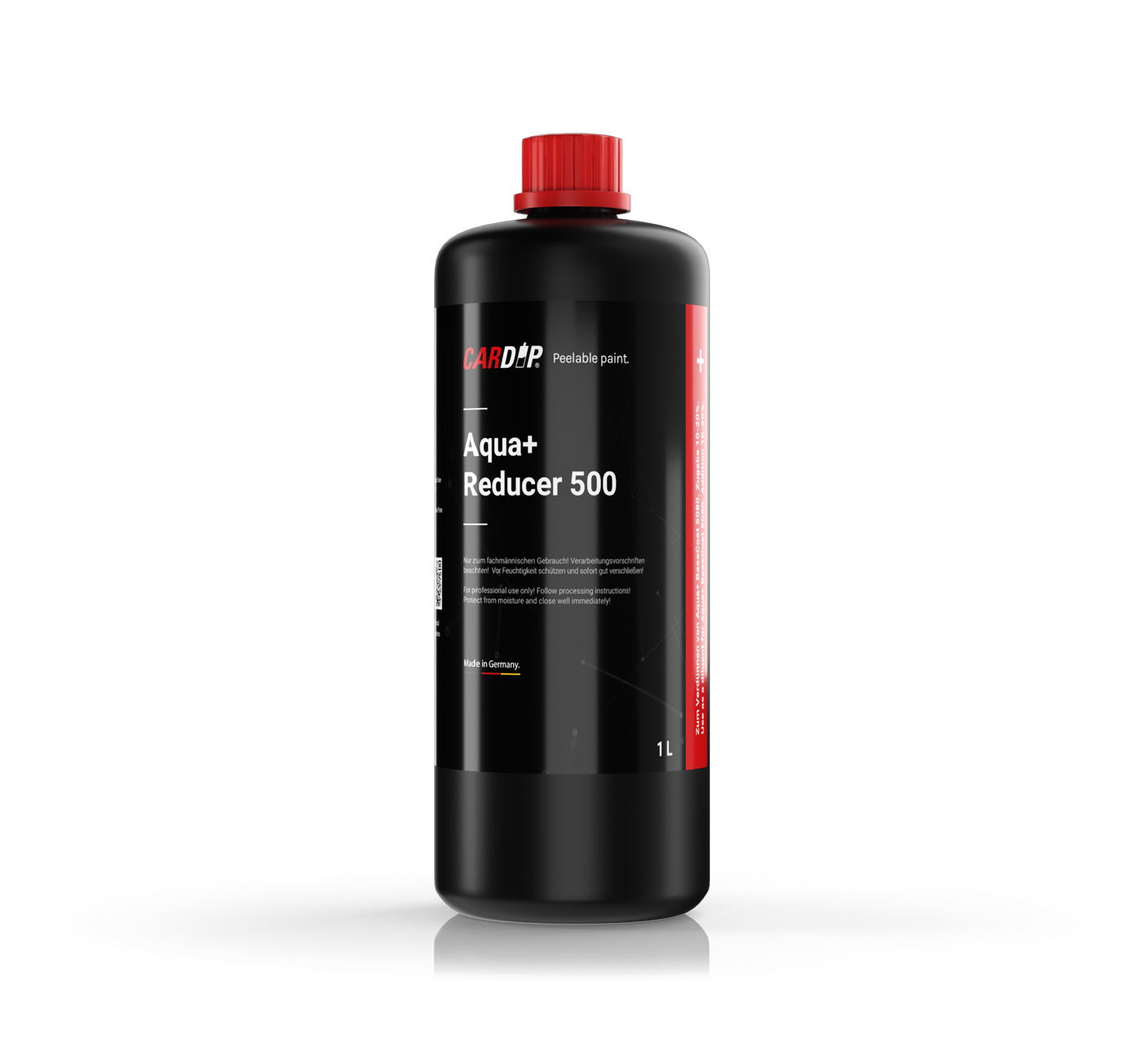 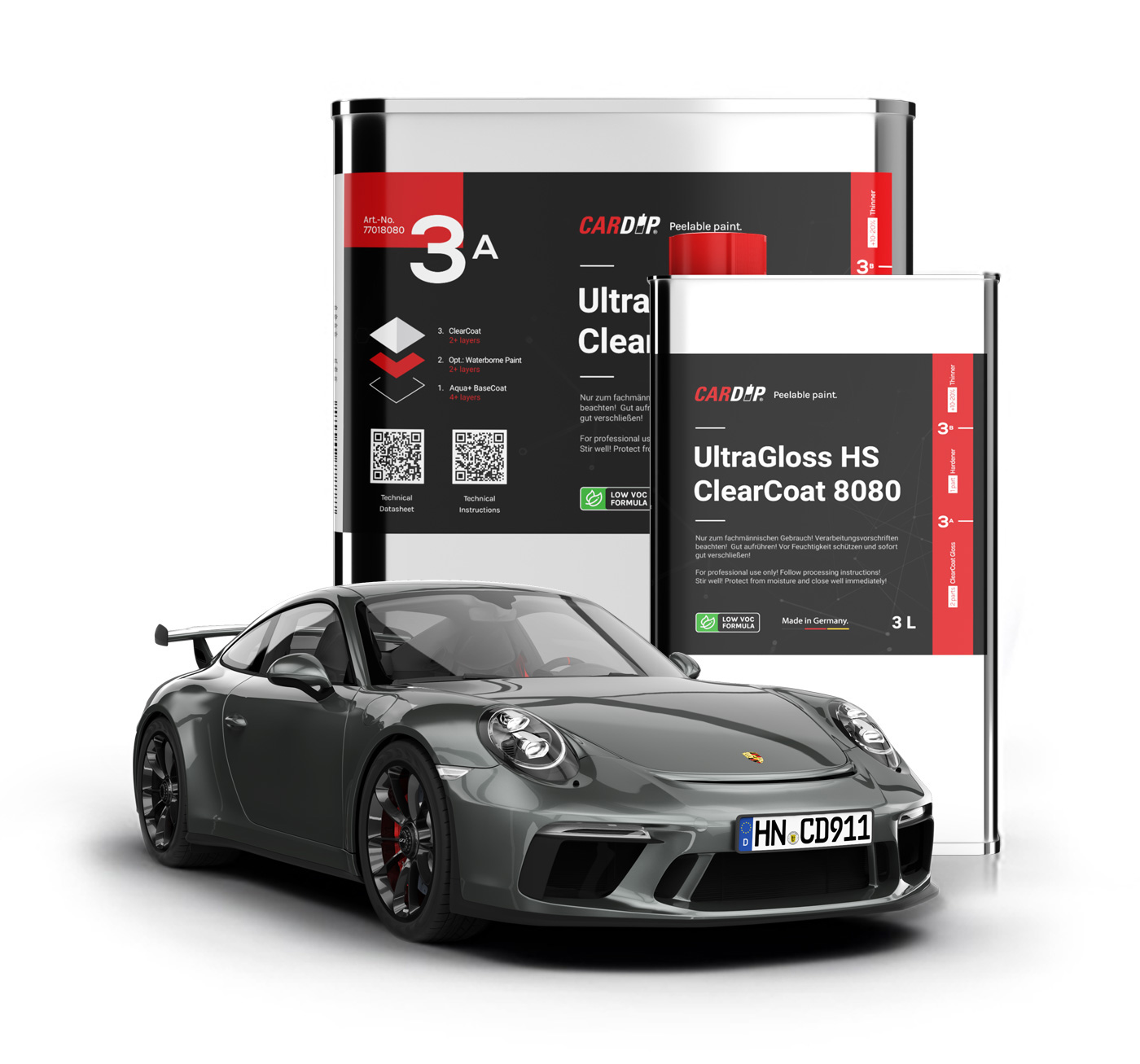 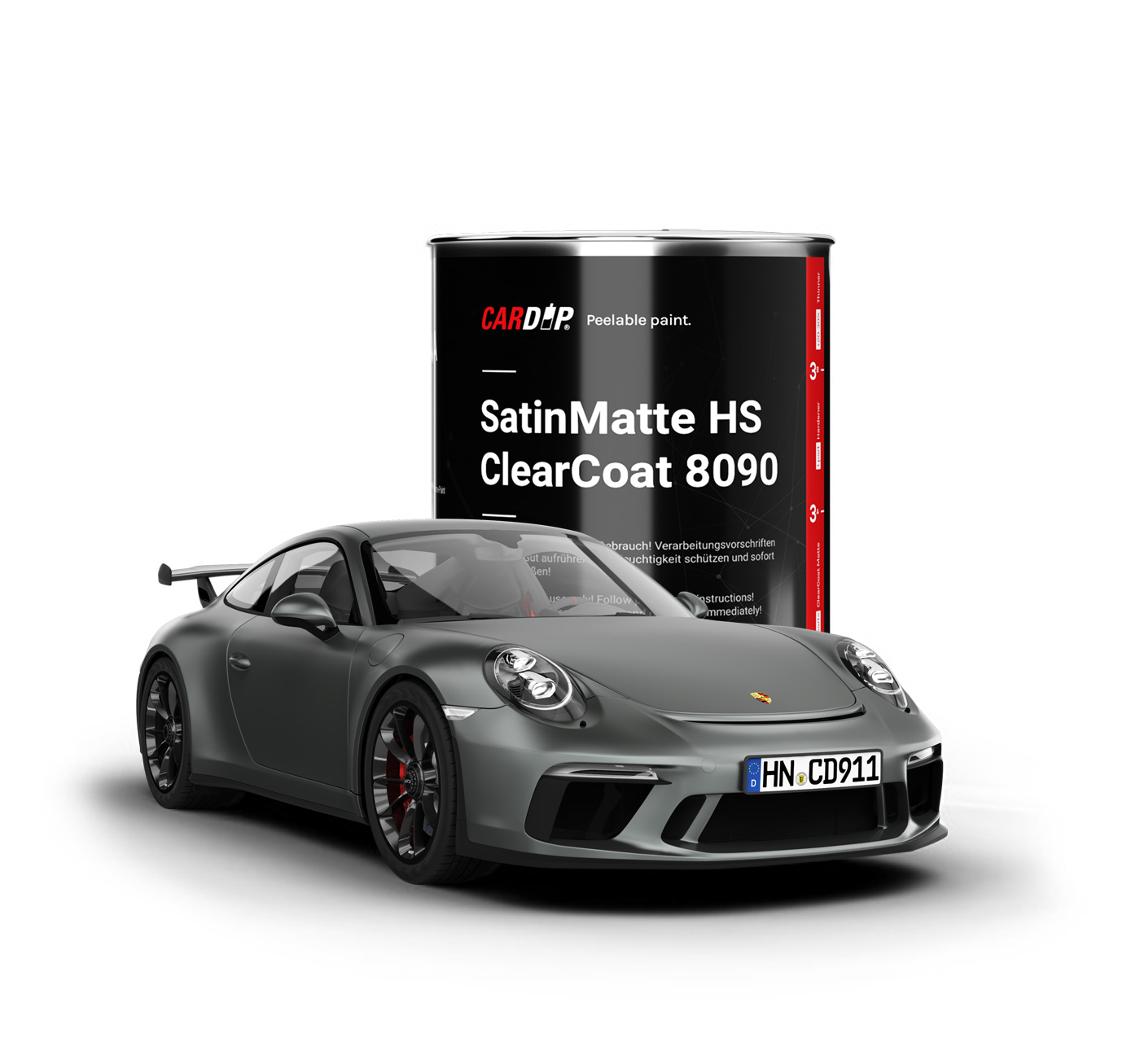 The CARDIP SatinMatte 2K HS ClearCoat 8090 is a permanently elastic, silk-matt 2-component HS clearcoat for the CARDIP Peelable Paint System. It is applied like a conventional matte clearcoat and is rigid and scratch-resistant in the hardened state. The product achieves a smooth and uniform matte finish as known from OEM/factory coatings, with the highest color and effect depth at the same time. 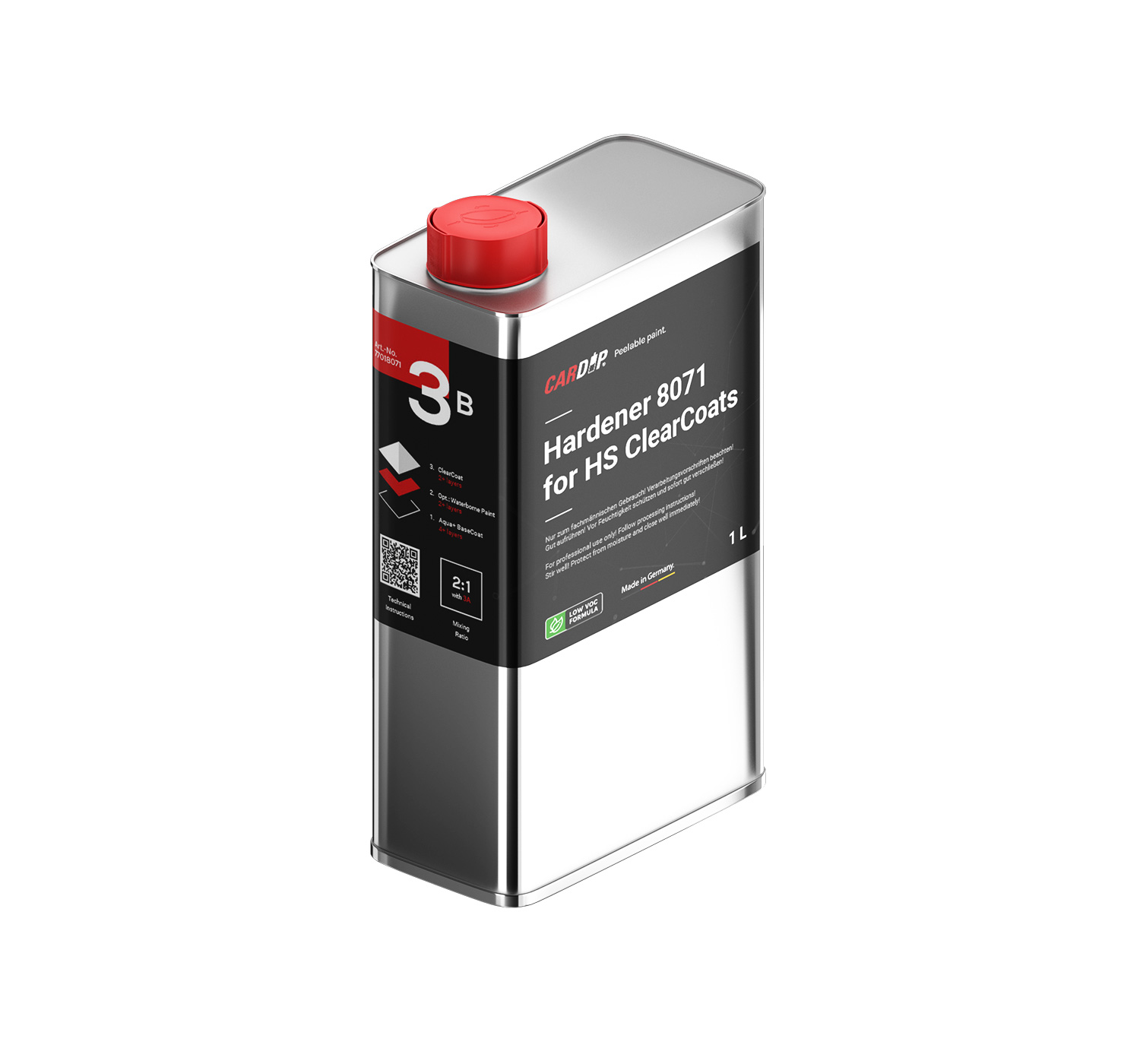 The CARDIP 2K HS Hardener 8070 is a highly functional, universal HDI crosslinker for the CARDIP 2K HS clearcoats UltraGloss 8080, as well as SatinMatte 8090 of the CARDIP Peelable Paint System. The specially developed hardener for peelable paint clear coats helps the clearcoats to achieve high weather stability, especially in terms of UV exposure and chemical resistance to organic and inorganic contamination.

Chemical
properties
on the test bench.

The CARDIP® Peelable Paint bonds by adhesion to the structure of the original paint and can be easily removed, even after years, without leaving any residue. Due to the layer thickness of up to 250mμ, the peelable paint protects the original paint against scratches, weathering and even stone chips with a tested stone chip resistance of more than 90%, according to DIN EN ISO 20567-1.

CARDIP peelable paint is developed and produced in Germany. 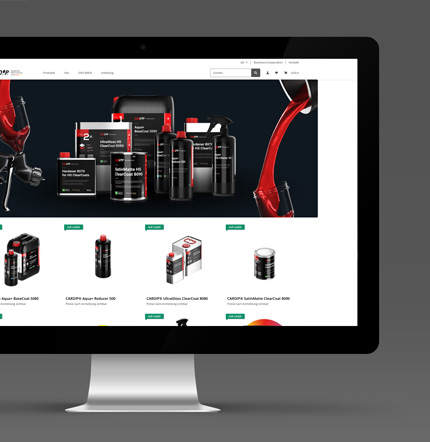 Order Peelable Paint directly from the manufacturer in the CARDIP online store. 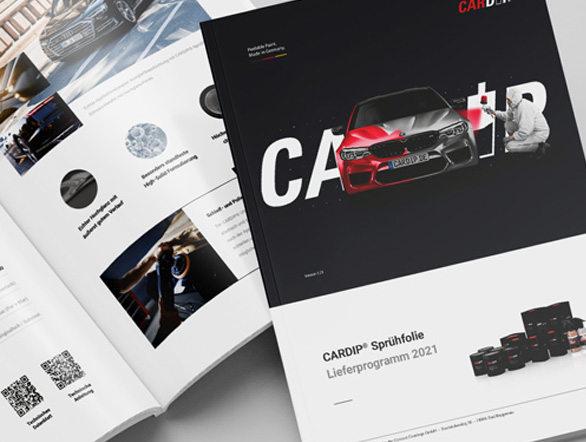 All information about the CARDIP System and the individual system components.

CARDIP peelable paint usually lasts for the life of the car, depending on how it is handled and used. long. From the technical side, unlike conventional adhesive film, there is no time restriction on the durability. The durability of the peelable paint is only influenced by mechanical impact. This means that the less stress the longer the coating lasts. The CARDIP peelable paint is very durable and usually does not lose its bond. The peelable paint can withstand temperatures from -50°C/-58°F to over 100°C/212°F and thus resists local climate conditions and the heat of the brake system, exhaust and engine without any problems. Due to special additives, the coating achieves a long lifetime and neither fades nor becomes brittle or yellowed.

CARDIP Peelable Paint forms an adhesion at the contact areas between the surface (e.g. vehicle paint) and the film layer due to molecular forces (so-called adhesion forces). Unlike conventional vinyl film (so-called car-wrapping film), the peelable paint does not stick by means of a chemical effect such as the use of an adhesive but by the laws of physics. This makes the CARDIP Peelable Paint the most gentle technology of surface coating.

3. In which colors is CARDIP peelable paint available?

The Aqua+ BaseCoat 5080 of the CARDIP Peelable Paint is colorless / transparent. The film layer can optionally be overpainted with commercially available water-based paints and thus can be mixed / produced with paint.

4. Can CARDIP peelable paint be removed without leaving residues?

The Aqua+ BaseCoat 5080 of the CARDIP Peelable Paint System forms a removable film in a multi-layer process that can be removed without leaving any residue. To remove the film coating, the layer must be opened and can then be peeled off.

CARDIP peelable paint is designed for professional application by the paint specialist. Therefore, the product is supplied in a container for application with a spray gun.

6. Can the peelable paint be pasted over?

After adequate drying, stickers and lettering can be applied to the peelable paint.